this game is very fun

Spikes are op but iron takes a lot to find 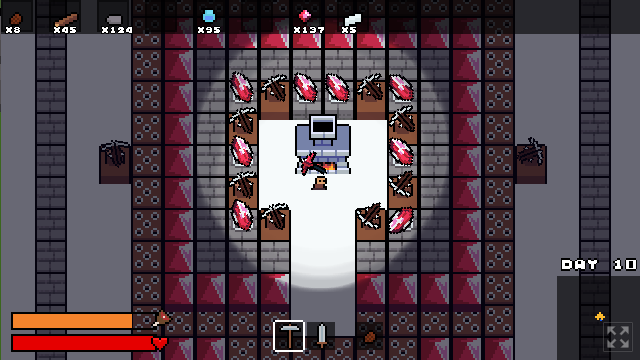 really cool game, I hope it will keep going :)

Cheap Base That Can Be Built On Day 3 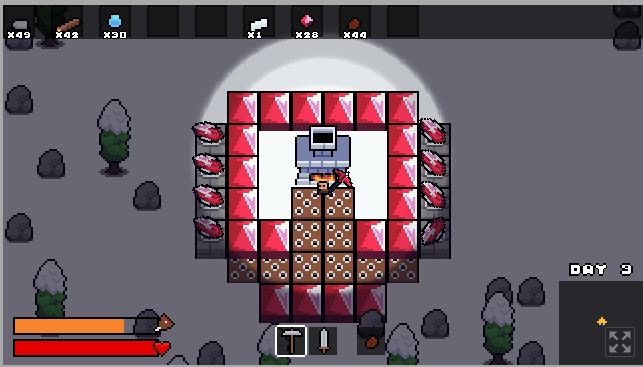 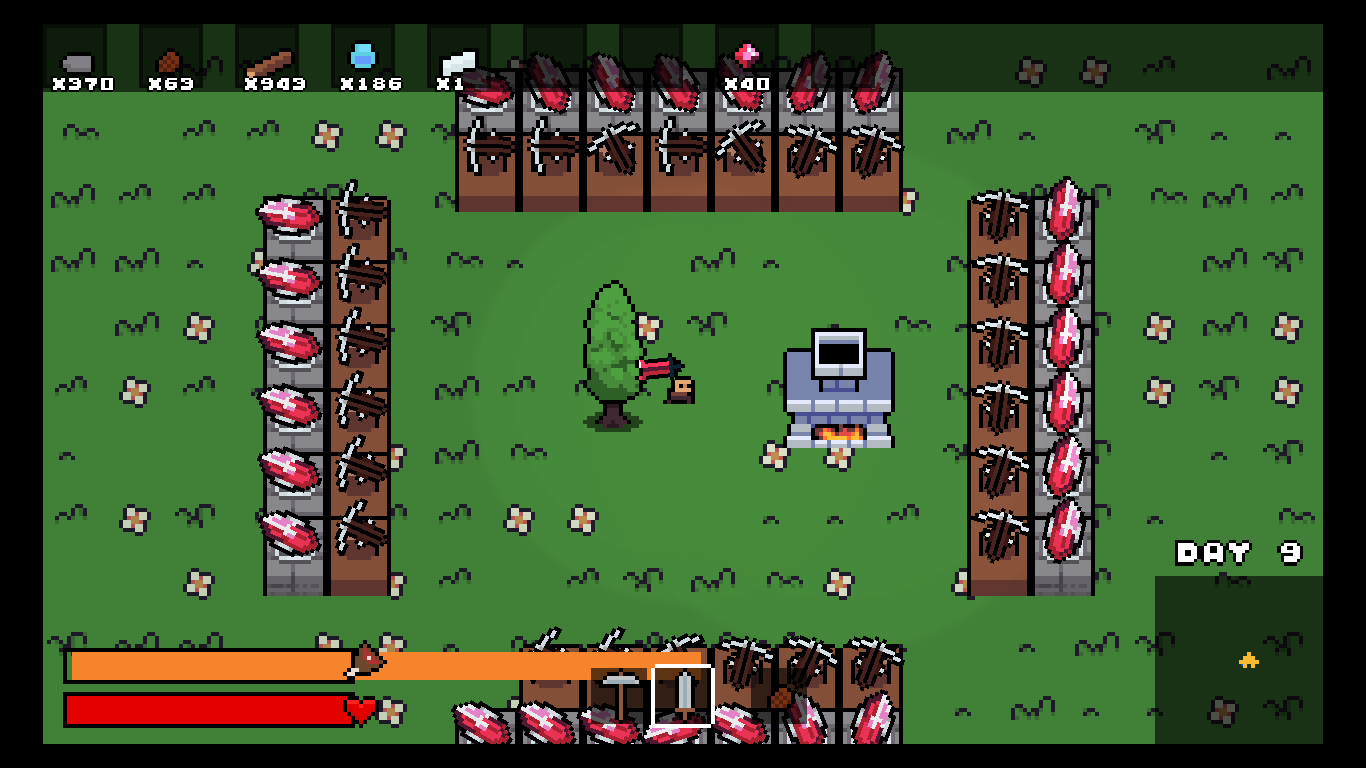 i found a glitch: hold the mouse (when mining, attacking), repeatedly press the 1 (2) key, it will damage to tree, rock, iron ore, enemy in a large area

sword is easy to use than pickaxe 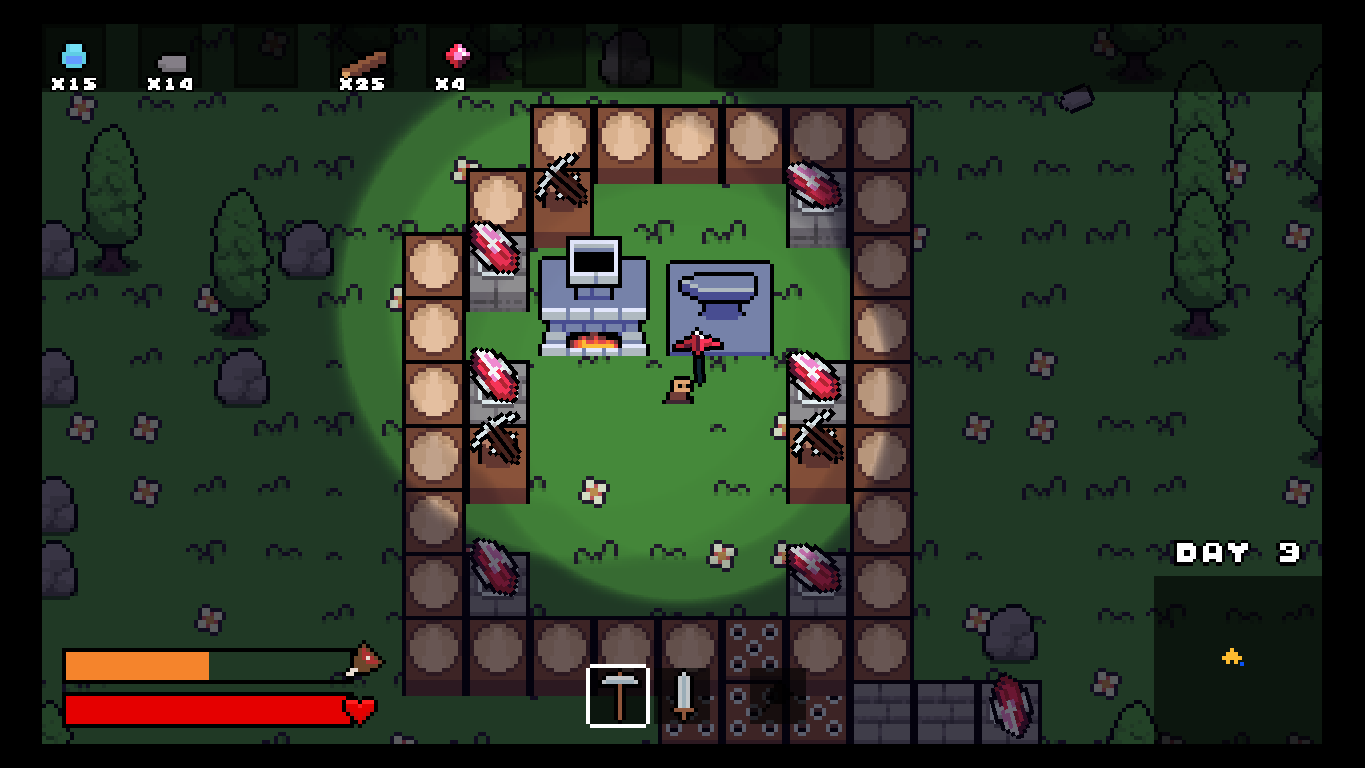 what happend to the creator of this

Lol I want to make a very similar game :D

there should be a way to gather items in the world or even delete them , they cause massive lag or even crash , and there should be auto save or at least manual save at the pause UI

you are monster , monsters are living creatures too (JK)

i loved it when saw i

WHY CANT YOU DOWNLOAD THIS ITS AN GOOD GAME?

When I play it the game just stops working for some reason. The screen just freezes

You should make a discord server!

Also, did you allow this? https://www.miniplay.com/game/minerest

i did not hmmm

we need a damn command to delete all the items on the ground. my game at times is like 5 fps

just pick them up?

or do u mean buildings

yes I do mean items and picking them up is a real hassle because I have turrets around the map and it just ends up tanking performance (btw buildings also lag me).

ok, i really like this, the update gives me a lot more to do and explore, and i can explore safely because of the minimap, but despite that i found a couple of bugs and things that could improve. First, there's still no pause button so if i want to do something else and then come back i can't, also the progression is kinda wacky, i was gonna say that you should make the crystals harder to get but then i got the skeletons with hammers and realized that without the blaster i would have died so my idea is to make cystal gear worse or give enemies more health so it isn't the best gear and kill things in a couple hits because getting crystals is really easy, also the slime sword is kinda useless becasue i got the materials for the crystal sword first and getting the slime was more of a chore than a upgrade. Now to bugs, there's a bug that hasn't been removed since the jam version, the bug makes it so if a slime attacks you it just hits you once and then if you don't move it doesn't damage you, also i found a furnace out of bounds via the minimap, my structures started attacking nothing, and i couldn't attack with my sword near structures. Despite all these "complains" and this long comment i really like this game and i just want it to be the best it can, thank you.

Thank u for the commnet, so there is a puase button if u press "P", and the slime thing is not a bug if it wound damage u constantly it would take half ur health in one hit, the furnace that out of bound will be removed in the next update :D, ur turrets shot cows and slimes if they see them but for u they might have been off screen, the sword bug i really need to fix sorry about that one XD and agian thank u for the support :D

Im so glad that there is pepole like u that give this good feedback so i can improve thank u !

Thank you for taking your time to read my comment, and i'm sorry about the pause button, i didn't knew about it

haha its all good :D

i love the new update! the autumn biome is cool and it has a purpose to explore because the deer give more meat than normal cows, and it just looks really nice. the visual updates on the player and other stuff helps to keep the game feeling fresh. Same goes for the new tools mechanics, they feel really nice, especially the pickaxe. I like the resource pickup text concept, although here is a suggestion to improve it: whenever you pick up a lot of stuff, it starts to get really jumbled and you can't really make anything out. My idea to fix this is if you pickup two or more of the same resource, then instead of having another text spawn, just move the old text to the new location and change the text to have the new number. For example when you pick up two pieces of wood, you won't get 2 different texts that say "1 wood" and "2 wood". You will just have the original text that says "1 wood" move to the location of the second wood and it will now say "2 wood" This is just a little suggestion to improve the system a bit. Overall. nice update! and it released really quickly :D

I will play more soon and reply to this comment with everything, but basically, the new update is looking visually stunning, I love the new sword and pickaxe, the pickaxe feels super fluid and the extra drops from resources is sooo good. Feeling way different than 0.0.2 so far, you have really outdone yourself here man.

can you try to add dropping items and multiplayer? (oh and i got to day nine Lag killed me)

i dont think multiplayer will be thing i dont have skills to make that, i dont see a use for droping items

what game engine do you use for your games?

yea sry about that

I love this concept and would play more of it. I do wish it was easier to switch between modes. Using right click to switch between ax and sword, or build and destroy would be a great option. Q is a weird button to use, space or E (since that's inventory in minecraft) would have been more familiar.

In what engine this game was created?

This  game feels like it was made for me, I love TD and survival games. I am ecstatic to know you are making more. you are a good developer

Thank u very much man :D

Hi, i really like how you did the procedural generation in this game, would you consider posting a tutorial on you channel about it?

yea i have been thinking about that, im glad u liked the game

Thank u very much

I had a pretty fun time playing this. With more updates I think that this game would be insanely good, and hopefully more people come and check it out, because it's worth the time. I'm ready for more info about this game

Thank u so much or enjoying it ^^

This is a mix of my 2 favorite types of games- TD and Survival. This is one of the best games I ever played. Thanks for making it free!

this is en early demo ^^

I covered my entire base in spikes, and it was really useful. I need to do that every time.

If a skeleton walks next to your base, they get hit instantly.  I built my base to small, it was the only reason I survived night 3.

update coming soon? Take your time, but i can't wait

im glad u are hyped for a update^^

Amazing game. Would be better with a chiptune soundtrack, and maybe better weapons and pickaxes (for the anvil?)

yes that is what the anvil will be used for^^

Possible ways to win maybe? Such as mining every tree and rock on the map.

woo you made this in construct 2 its really impresev

Honestly, this game is amazing, i would recommend showing the tutorial in the game though and maybe a soundtrack. 10/10!

thank u very much

maybe try adding like a little beacon so we can back?

side note, it really is an awesome game! I looove the idea and style. maybe if you can figure out how to fix the night 4 skeles to like night 7 as a boss fight that'd be awesome

Yea i really need to add a marker so u know where ur base is haha, and i will fix the night 4 skeletons aswell^^

This game is pretty cool! I like the idea of a resource gathering tower defense. I was actually thinking of making a game sort of like this, thanks for inspiring me :)